Nerve cells let others "listen in" 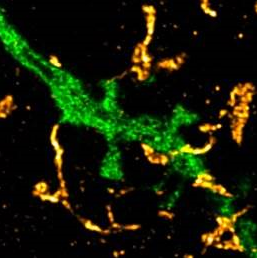 Spines with astrocyte GLT1.jpg: Single fragment of a neuron in green and the astrocyte processes mentioned in the communication in yellow. (c) Michel Herde

Study by the University of Bonn: The signal transmission in the brain is more or less exclusive depending on the situation.

How many "listeners" a nerve cell has in the brain is strictly regulated.
This is shown by an international study led by the University College London and the universities of Bonn, Bordeaux and Milton Keynes (England). In the environment of learning neurons, certain processes are set in motion that make signal transmission less exclusive. The results have now been published in the journal Neuron.

If you want to share a secret with a friend in a busy environment, you may try to find a quiet spot, close the doors and shield the conversation from possible eavesdroppers. Nerve cells in the brain also communicate with each other behind closed doors. But the extent of this protection could be strictly regulated depending on the situation. The findings now presented by the international research team point in this direction.

The information transfer between neurons is mostly done chemically: In response to an electrical signal, the "transmitting cell" releases a so-called neurotransmitter at a synapse; this may often be glutamate molecules. These migrate through the synaptic cleft to the recipient cell.
There, they dock to certain receptors and generate an electrical reaction in the receiving neuron.

But the nerve cells in the brain are packed very densely. There is therefore a danger that the molecules not only reach the neuron for which they are intended, but also stimulate other neurons in the neighborhood. This is where the "closed doors" come into play: Specialized cells in the brain, the astrocytes, rapidly reabsorb the glutamate. This way they shield communication to a certain extent. "They do this by sending extensions near synapses, the so-called perisynaptic astrocyte processes or PAPs," explains Prof. Dr. Christian Henneberger from the Institute of Cellular Neurosciences at the University of Bonn.

PAPs have specialized transporters that remove the glutamate around the synapses, like small vacuum cleaners. The effectiveness of this mechanism is apparently strictly regulated: The researchers triggered a kind of cellular learning through a repeated electrical stimulation. This causes the receiver cell to respond more strongly to the signals of the transmitting cell in the long term. Experts also speak of "long-term potentiation" (LTP).

"We have now been able to demonstrate that PAPs retreat during this learning process," explains Prof. Dr. Dmitri Rusakov from the Institute of Neurology at University College London. "This increases the likelihood that neighboring cells are also stimulated by the glutamate release." This means that signal transmission also becomes less exclusive, which could explain other interesting observations where the cause was previously unclear: For example, LTP can also affect close connections between other nerve cells.
"This may be important for later learning processes," Henneberger suspects.

Some synapses also seem to be inherently less discreet than others. Together with his colleague Dr. Michel Herde and other researchers, Henneberger was able to show this in a study published a few days ago in "Cell Reports". The transmitter cell often releases its glutamate into the synaptic cleft at certain structures, the so-called spines. These are tiny extensions of the downstream receiving nerve cell. The PAPs often cover these spines almost like a glove. However, the larger a spine is, the patchier is this coating and the more glutamate can escape. "In the vicinity of large and strong synapses, other nerve cells are therefore probably excited more frequently,"
says Herde. In other words: Nerve cells with strong synaptic connections rarely speak behind closed doors.

Twitter
Tweet
Altro in questa categoria: « Penicillium camemberti: a history of domestication on cheese Women could conceive after ovarian tumours »